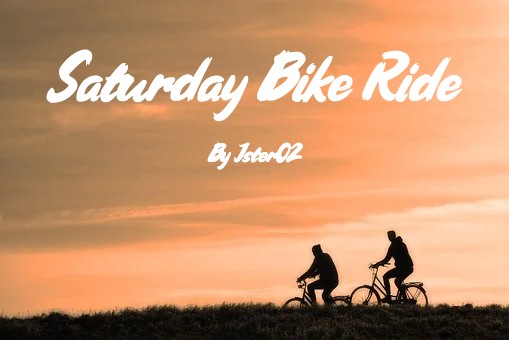 Netflix and video games can only go so far when it comes to fighting boredom. Usually the comfort of your own home is more than enough to make you happy on the weekends, but lately something feels off. You tried to rewatching The Office for the six or seventh time, but just couldn't get into it. After scrolling through your entire Steam library consisting of over five hundred games, you couldn't find a single one that looked worth playing. You're used to being relieved about coming home after a long day of work or school, but lately you've found yourself dreading the emptiness of your own home. There's no two ways around it, you're stuck in a rut and it's going to take something major to break you out. Luckily, you have just the thing. Before you have a chance to change your mind, you call up your friend who lives across town and tell him to come over as soon as possible. It doesn't take much to convince him to join you on the ultimate Saturday bike ride.

I'm trying to imagine what an America run by you would look like. I'm guessing it'd turn into something like the French Revolution, except instead of killing people for not being "revolutionary enough," there'd be a mass burnings of all forms of furry fanfiction, including anything relating to warrior cats. All forms of interactive fiction would be taught in English classes, with your work being presented in the same way Shakespeare's was before. "Lol fag" would become the new national slogan, perhaps finding it's way into the pledge of alligence, and every other dictator of a rival country would find their mom mysteriously having been banged.

Oh yeah, also genocide or whatever, probably. Still better than either our other candidates. Guess I know who I'm voting for.

The fact that I have now been granted the power to vote is frankly quite terrifying. I'm still deciding what I plan to do with this awesome responsibility, this choice that totally makes a statistically significant difference in the grand scheme of things.

Don't you know? Any teenager who catches wind of so much as a hint of violence in any story immediately turns into a serial killer without exception. Their brains just aren't developed enough to understand the difference between fantasy and reality, no matter what their personality was before. That's why every story where one character so much as steps on the toes of another character should immediately be given a 7/8 maturity rating.

Oh, and if you swear even a single time in your entire life, your mind is completely corrupt.

If you're thinking of publishing something unfinished, don't.  There's about a 99.9 percent chance you'll never come back to finish it, and it'll probably get taken down. If the storygame you're trying to write feels too long for you to finish right now, go make something smaller, and come back to complete the bigger work when you have the stamina to get through it. Unless your idea of too long falls anywhere under 3,000 words or so. If that's the case, then stick to short, linear stories for awhile before taking on a CYOA.

Other than that, best of luck!

If you're feeling clever, I bet you could find a way to mash all those ideas together into one huge story. I'm sure they'd love that.

Everyone starts out writing terrible things. The only way to get better is by writing terrible things until you learn how to make them less terrible. Even if you publish a story and it gets taken down, you'll still get a chance to learn from all the nasty comments people leave on it while it's up. As for what you're doing now, there's not even much risk of that, since you're just posting in the forums where most people won't really even pay attention. You'll get feedback from one or two people, and that will be that.

Besides, the fact that you realize you're terrible means you're actually further along than maybe you used to be. Better than some of the people who waltz in here thinking they're the next Endmastsr after crapping out a 300 word story. So finish your story, if you're still up to it. Think of it as practice for next time.

What makes you say that?

Richard is such a creeper name. I'm a mandated reporter, and I'm pretty sure I'd get thrown in jail if I didn't report someone like that within the first five seconds of him opening his mouth. Asking her to kiss him is straight up sexual harassment, or it would be in our culture. My word, I'm still cringing just thinking about it.