He was a real one.

For future reference, the opposite of yoink is yeet.

Couldn't have been me. Probably Thara or Tim.

It's one of the biggest 5-year-old threads still living

And it's extremely spicy. The first 4 words are slurs- and they don't stop coming!

Chronologically, it's probably the oldest one, around 5 years ago (Edited, I misremembered which one Egg 4 was)

That was quick! I'm astonished.

Because I expected this to last for all of easter, the remaining slowpokes can still claim 10 consolation points for finding all the eggs

I've hidden 6 eggs around the site in various shitposts of mine, and the first person to PM me their locations gets 50 points for each one. The eggs are very big, you'll know when you see them. They also may not always be on the first post- so scroll around for any big pictures of eggs! Here is a magical scroll of clues- I may release new clues later on if I can think of any that don't give it away. Good luck! 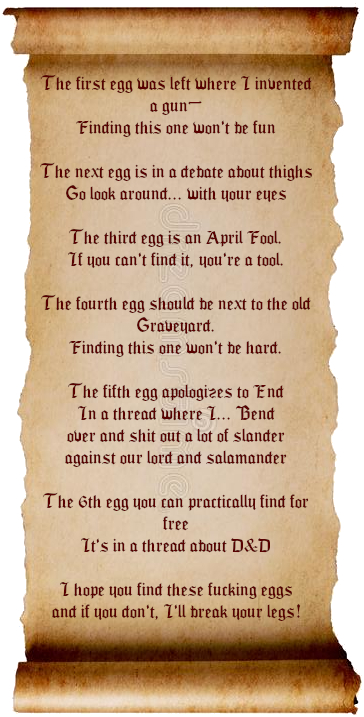 They're all red-eyed burglars! They're never up to any good!

Look at this scandalous bandit! You know why they're called pied lapwings? Because they'd steal the pie right off your windowsill!

Inside everyone, there are two capybaras