Avery_Moore, The Grandmaster of the Written Word The Price of Freedom: Innocence Lost 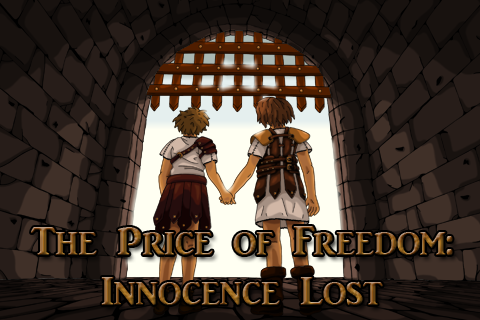 You are ten years old when you first feel the weight of shackles around your wrists. In a matter of hours, your whole world is turned upside down as you and your brother are dragged away from your home in Greece to work as slaves in the Roman Empire. Now you must struggle for survival. Every decision you make will affect your future. Your life, the life of your brother and the lives of your friends are in your hands.

Begin your journey as a child, and make heartbreaking choices that will shape the adult you will become. But be careful. An act of kindness might come back to haunt you, and a thoughtless word could earn you some powerful enemies. A split second decision will determine who lives and who dies. Will you sell your soul to win your freedom, or sacrifice everything for the people you love? Will you even live long enough to see the sun rise?

And a really, REALLY special thanks to my patreons: Chanbot, Mizal, Ryan Esher and SpartacustheGreat.

You can also keep up to date on my games by following me on social media at:
https://www.facebook.com/AveryMooreGames
https://twitter.com/Avery__Moore

Murder at the Manor
unpublished

Four mysteries in one. A man has been murdered in his stately home in the country, and you have only four suspects. Can you figure out who the killer is? It could be anyone... Literally. Because the killer is chosen at random at the beginning of every game.

Note: This game was originally made for a competition put together by Morgan R, where writers had to make the best game they could in a day. Unfortunately, I didn't get the game finished in time, so never got around to publishing it, but I stumbled across it a few years later and decided it was worth finishing. So here it is, hope you enjoy ^_^

The Lawless Ones
unpublished

This game has lots of stuff.

The Price of Freedom: Brothers in Arms
unpublished

Now that you've brought it up, I do find the history of the word "gay" to be really interesting, since it's meant so many things over the years. Everybody knows that the word "gay" used to mean "happy" before it meant "homosexual", but it's actually had way more meanings than that.

For example, in the Christmas carol "Deck the Halls" we have the line "Don we now our gay apparel" which roughly translates to, "We are going to put on our best clothes" with the word "gay" meaning "best" or "most expensive" but even that's a relatively modern meaning, the song being written in the mid 1800s. The word "gay" goes back way earlier, and the meanings are pretty surprising.

As far back as the 14th century, the word started to become associated with "sexual immorality" ... But, not the way you'd think. It was more to do with promiscuity than homosexuality, and around the 17th century, the term "gay woman" was generally used to describe a prostitute, "gay house" was a brothel and, ironically, the term "gay man" was used to describe a womanizer.

Thanks Morgan! I do really like the story I'm working on right now so I'm going to try hard to stick at it. ^_^

To be fair though, the way that your stories are written, I don't think you'd have to write something linear to get published. You could go for more of the old Choose Your Own Adventure style books, but for adults... Hell, you wouldn't even have to write anything new. I'd sure as hell pay to have a copy of Eternal on my bookshelf. ^_^

Just make sure to include lots of rape and torture and incest and you'll be set. ^_^

Oh yeah, I get that big time. That's probably the main reason why I haven't finished Price of Freedom yet. I am in a pretty shitty state financially and feel like I really want to take a shot at getting something traditionally published so that I can make some money off of it.

Do I think I could be the next J.K.Rowling or George R.R. Martin? No, because the vast majority of their success is based on factors that were completely out of their control. Specifically, that Warner Brothers and HBO picked up the titles and made incredibly successful Movies/TV shows based around them. Don't get me wrong, they were both extremely successful before this happened, but I imagine that success was likely in the lower millions rather than in the hundreds of millions. There are plenty of books I've read that are more than worthy of a film franchise or tv series that have never been picked up. Likewise, there are some incredible books that have had film/tv adaptations made of them where the adaptations were completely shit and did nothing to draw positive attention to the books.

That said, do I think it's possible that I could write a book decent enough that it could sell a good few thousand copies? Yes, I'd like to think so. Of course the quality of the writing doesn't always translate into number of copies sold, but I'd say it's at least a possibility... Or it could be a possibility if I ever got around to actually writing stuff.

One thing I've found in the last few years is that I find it a lot easier to write Interactive Fiction than I do to write a straight up novel. And I think the main reason is to do with choices. In Interactive Fiction, you have choices all the way through the game. If the reader makes a decision and they don't like the results of that decision, they can go back and make a different one. Because of this, I don't feel like every path I write has to be completely perfect. The players can play through different paths and decide which one they like best. With traditional novels, you can't fall back on that reassurance. If you write something in the story and the reader doesn't like it, you're screwed.

For instance, in my game The Lawless Ones that I made over on Dashingdon, the players all had 6 different backstories that they could choose for the protagonist (kind of like in Dragon Age Origins). If they didn't like one of those backstories, no problem, they had five others to choose from, chances are they'd find at least one that they liked. With the story that I'm writing right now, I'm absolutely terrified of getting the protagonist's character and backstory wrong. I'm worried that readers will dislike the protagonist if I make the wrong choice. I can't count the amount of times that I've changed my mind about what my protagonist's backstory should be, and it's made it really difficult to make any progress on my story, since the protagonist's backstory directly effects his character throughout the rest of the story, which would effect the dialogue and the choices he makes, ect, ect... So the chances of me ever becoming a successful writer are close to nothing, not so much because I don't have the talent, or how difficult it is to get published, but because I spend all my time rewriting the prologue and never actually make it past chapter three.

In regards to you though... I see no reason why you can't do both! Write and publish an amazing story game, then if you still think, "this story idea is amazing, I could make money from this" then write a novel based on the story game. Granted, you would probably have to unpublish the story game if you got a book deal, but by then, all the hardcore CYS fans would have read it anyway, so you'd get the best of both worlds. ^_^