hetero_malk, The Grandmaster of the Written Word "In normal times a mad man like Malk would have been hanged for his crimes. However in this time of darkness mad men can reach positions of great power" - EndMaster

If you want a short game, play this http://chooseyourstory.com/story/cybermonkey

Achievement Unlocked: Not Mine (-10)

Achievement Unlocked: Begging For The Abyss (-300)

Achievement Unlocked: Lord of the Edge (200)

Son of King Lugalbanda, who became a god,

and of the goddess Ninsun.

A short, silly, high-octane ride through a cyberpunk future where your bullets are few, your friends are fewer, and the long tentacles of the law are slithering up your pant legs.

I am aware that technically, writing a sentence in all capital letters is gramatically incorrect. I did this on purpose, several times, for stylistic effect. If you point this out in the reviews, a team of hit-apes will kick in your door.

WARCHIMP
HIGH OCTANE ALL CAPS PRIMATE MADNESS From the creator of CYBERMONKEY, the genre defining cult classic that got the author EXCOMMUNICATED from the IFDB! Entered into EndMaster's 2021 Manifest Destiny contest in the last moments before the bombs fell.

Winter, After the Harvest

Take the role of Lord Winter, an aspiring sorcerer and the scion of a noble line that has fallen into obscurity. 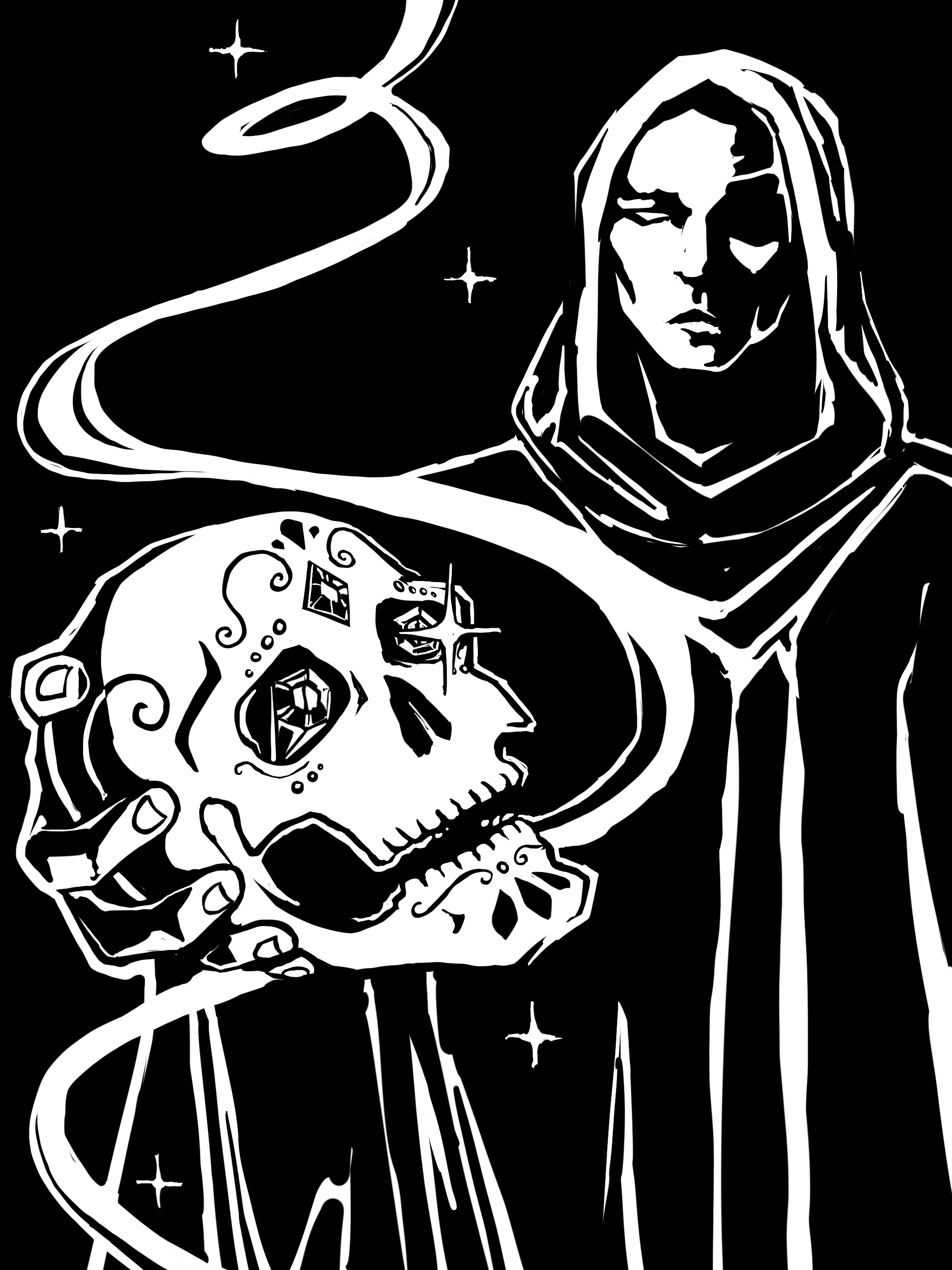 Cover art by the talented MadHattersDaughter.

"Death is struck and nature quaking;
All creation is awaking,
To its Judge an answer making.
Lo, the book, exactly worded,
Wherein all hath been recorded;
Thence shall judgment be awarded.
When the Judge His seat attaineth,
And each hidden deed arraigneth,
Nothing unavenged remaineth."

Ultimately, the fate of life is to destroy itself.

this is so fucking stupid

Whom the Gods Would Destroy
unpublished

Stop being such a zoomer and go play the original Deus Ex. I reinstalled it after a few years and confirm that it still rocks cock

Squire Chet, white as a ghost, vomits up two days worth of PBR and campus  chicken fingers. Stuttering, he re-iterates his request, which can also be conveniently found in the last thread. "S-So, yeeah, I just st-started my adventuring career and need the cheap.. the cheap... I need the cheapest thing you can make me."

Suddenly, a beturbaned scholar strides into the square. He accuses the Pasha of an un-Islamic interpretation of the First Teacher, prompting a loud metaphysical argument that removes the Pasha and all his eunuchs from contention for the next round.

A moment later, an adventure rides in, astride a leased horse. He hasn't shaved in a couple days, and his eyes are weighted down by bags of monumental proportions. He's wearing a beer-stained sweatshirt that reads Skalreach Frosh 1103. He clears his throat as he speaks. "Uh, hey guys, I'm Squire Chet.  I just moved out of my parents yurt for the first time, and have been striking it out on my own. Obviously, my budget is pretty tight, and I'll be paying off my loans to the Adventuring Guild for the rest of my life, so I need the cheapest thing you can make me."

Pasha Malk, who is know wearing a blue-and-red turban instead of a red-and-blue turban, enters his howdah-forge in a flash. From within, the assembled onlookers can hear the crash of the hammer against the anvil, as well as curious music; gone is the usual pious chanting, replaced instead with a kind of fast paced rhyming that boasts of slaying one's enemies and ruthlessly pimping one's hoes.

The Pasha emerges, carrying a curiously biphallic shape, veiled by a velvet curtain.

"In the Capybaliphate, each man of worth must study the great Sultanate of Rum; decadent and depraved, but the greatest empire who has ever lived, and a fine example to all would-be continent conquerors.  I remember when I was a lad, I was taught the ways of the romans by my tutor: my father's Court Jew, the most learned Levi Al-Shekelberg. He taught me how Romans would throw lavish blood games to celebrate their false gods, usually accompanying a festival. The most joyous Roman holiday was Saturnalia, slaves would dress as freed men, and unmarried youths would run wild through the city, striking women with gargantuan leather phalluses. I have created, then, a lavish weapon, fit for spilling blood and celebrating a most phallic holiday. May I present to you the

The Pasha discards the velvet curtain, revealing two solid, gold-coloured cocks-'n'-balls, adjoined at the scrotes by a chain. "The secrets of this weapon were taught to me by the Pimp-Artisans of Detroit, who showed me how to imbue a weapon with misogyny most potent. This is a weapon fit for spilling blood in the arena in stylish fashion, as well as for smacking a bitch around on Saturnalia."

"My friend, the noble goblin offers you a passable option. However, a janitor's duty is to clean - scattering arsenic chalk everywhere would surely produce a tremendous mess, that would require an unpleasant and lengthy cleanup process, especially given as the vacuum cleaner will not be invented for centuries. Instead, allow me to introduce you to the future of pest control, the

He produces a roll of the chinese sandpaper. It is a cruel looking length of parchment, covered in tiny bristling barbs. "In my travels to the Furthest Orient, I marveled at the Eastern Pest Warriors, who deployed lengths of this marvelous invention to trap various rats and hungry ghosts. Moreover, they make most ingenious use of it, to entrap men on the road who claim to be Buddha. I offer this Eastern wisdom to you at reasonable cost, so you may deploy it, forget about it for a few days, come back and have your job done for you."

"My friend, I hear your pleas. The Capybaliphate has ancient ties to the kingdom of CYStia, and it grieves me tremendously to hear that the diaper-wearers once again blacken the borders of an ancient and noble land. I must confess, then, that this is not an item I have forged at all - this next one is a piece from my personal armoury.  It served me well in the jihad against the goblins, may Allah singe their souls with the hottest helflire He can create. May I present to you...

In truth, this is an evil weapon. It brings me no joy to present it to you, and I would only recommend you use it in the most dire of circumstances. Eunuchs! Bring forth the retard, that I may damn my soul for the preservation of a noble land."

The eunuchs solemly bring forth a chained retard. It is a troglodytic demihuman, wearing the tattered leather armour of a badlander tribe. Its skin is crudely branded with a Warrior Cats tribe. The Pasha raises the branding iron from beneath a velvet cloak. It glows, faintly, with a sickening green aura. The sickening green aura of the Dutch Orbs. He heats it in the forge, and soon the head grows red hot. As the brand heats up, evil runes, drawn by an insane sorceror,  become charged with a power ancient and foul. In a single thrust, he brands the retard's left asscheek. It howls in agony, its howls quickly turning into a sickening braying, and then into incoherent speech.

"Licorice! Hinga Dinga Durgen! Plug the dikes! MMA! Cycling!" it yelps. The soul drains from its eyes as it falls to the ground.

"My friend, the retard can respect only a show of strength. With this ancient relic-brand, you have the power to turn any prisoner you like into a Dutchman. If the retard hordes know that such a fate awaits them, they will flee your walls as readily as they fled the Creative Corner during the Great Scouring. A retard is a creature of appetite, so this is the greatest curse you can offer them; an accursed Euro half-life, joylessly cycling and scarfing down disgusting green orbs. I offer this item at no cost, in honour of the ancient friendship between our peoples. I ask you only this, however: are you willing to stain your honour and anger highest Allah, by creating more Dutchmen? Whether your ancestral lands are worth this crime, I leave to your noble judgement."

The Pasha ponders this, for a moment, before donning a chef's hat and apron over his resplendant raiments of honour. He enters his howdah. A faint cursing, followed by the sound of a blender loudly blending can be heard. He emerges with a curious vial of a blue liquid that seems to emanate pure evil, shimmering with vibes so bad that they cause one to shudder .

"It is well known that the greatest metal-bards have the ability to snarl, bay and growl hideously, for the amusement of their depraved fans. Esteemed bard, I have crafted for you a beverage so evil, so rancid,  of such foul import, that I risk my very soul by selling it to you at reasonable cost. I have the distinct displeasure of presenting....

KIEL'S | GATORADE | INFUSED WITH THE ASHES OF THOSE WRONGED BY CAPITALISM

The Pasha shakes it up, and the ashes swirl menacingly. "One swig of this, and the torment to your vocal chords will be so intense that your voice will reach such levels of ownage and brutality that it will cause men to cut their ears off just to escape it. The liquid was extracted from the life-essence of the Arch-Pedophile Kiel Farren, and distilled into a refreshing sports beverage. The magic was then further enhanced by adding the torched remanins of a dozen Portlandian Bluehairs, so that their assmad souls can further enhance the brew."

The Pasha shakes his head. "Unfortunately, my artifices can only create objects of great beauty, so I have nothing for you."

I'll pass this round.