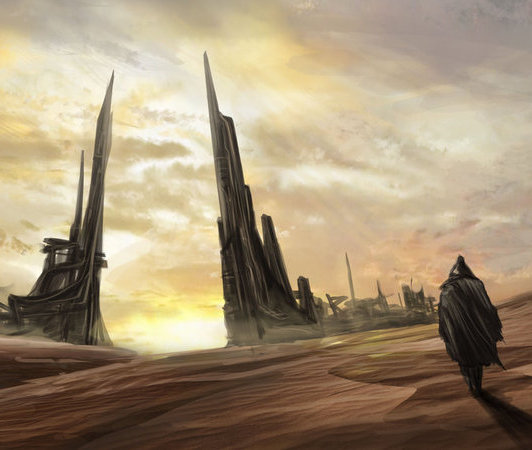 I make adventure stories. Most of my stories will be from the same connected universe. Some characters may meet each other from different stories. Also, I'm 16, so I guess you could say I'm not the best writer but I'm learning.

The cool picture below is the picture for my next story. I'm spending lots of time on it, so it should turn out well. It will take a good bit to finish though. I don't want to rush it.

I'm back again and I'm feeling a little less inspired to continue my stories after reading some replies to my previous post. I just wanted to inform you guys why I was inactive but y'all had to do it to em did ya? I guess this isn't the community I was looking for and apparently being 16 on a make your own story website is a little too young for you guys. Anyway, I will continue my writing elsewhere. For those of you that gave me advice I really appreciate it. You guys are all smart and creative storytellers. Maybe I'll return to this website in a few years from now when I am of the "preferred age."

Now then, continue with your usual lives, I'm sure leaving won't be much of a difference since most of you have forgotten me anyway.

ya kicked me out of the discord. I don't care though lol. I will admit I was inactive. Its just I have a weird schedule you could say when writing stories. Sometimes I get a creative spark and write nonstop for a month, then lose that touch and go inactive for a bit. I'm not saying I'll be active a lot now because I have school, but I'm not leaving. Once I get my creative spark again I'll be back.

Yeah, that was bad describing by me I guess, I added so many details they canceled out each other.

Interesting input, that confrontation with the man is going to end up having lots of branching paths now.

First of all, thanks! These kinds of questions can really help improve my story and my writing in general. Now to clear up the colors in the sky thing. I was trying to explain the sunset you know? You know how sometimes you look into the sky and its red, and then maybe its pink during the sunset? Maybe I'm just really bad at describing things. By the time the reader arrives at the hut, the sun finally disappears over the horizon, but I guess I messed up on describing that too.

Anyway, I'll try to incorporate this into my story! Thanks again!

After re-reading I can agree with your recommendation of using "You" too much. In fact, back in the good old days (fifth grade), I remember my teacher saying "No 2 sentences should start with the same word." or something like that, and I have clearly ignored that rule when writing this story.

Now about the thing with the MC killing the innocent old man. Yes, I guess you could say that was poor character development, and the reader should have been able to make a decision, BUT in my defense, there was actually an option I added that wasn't included in this "excerpt" from my story where you can walk over peacefully. The only thing is (yes I know this is dumb too and I should probably change it) you die if you enter peacefully because he kills you. I know it sounds dumb but I want the reader to learn early on to fend for themselves, because some characters may betray you later on. The reader should learn to not rely on others. The reader is in a different world, and the characters around him/her are not all who they really seem.

Like you said though, the MC wasn't really being threatened at all, so a little more information about the poor guy and who he was would help the reader make a better and more informed choice about the situation instead of just looking over at the hut and flipping a coin to see if the reader should kill the guy in there or not. I'll update the story so the reader has more control, and also update the part of the story so instead of randomly killing the man, the reader kills him out of self-defense or from finding out the man is a hallowtooth or something. (which are the bad guys of the story)

Thanks for the feedback though. I'm a pretty noob writer so criticism always helps.

This is basically just the first page of my story. Remember, it's not completed so as you may know there could be some spelling/grammar errors. Anyway, with that in mind, it's not much. It's barely enough to understand whats going on, but it's a good intro to my writing style and tone of the story. Let me know what you think and I'll add more to the story on this post...

You have awakened. Your body lays on the ground and does not have the desire to move. Your body feels numb. Glancing up at the sky, you squint due to the bright shining sun. As you check your surroundings you notice all the reds, oranges, and yellows in the sky. Now you feel the warm, crisp sand underneath you.

Your hand reaches out at the sand and grabs a handful, then you let it fall through your fingers. The only noise that can be heard is the light breeze that blows across your face.

A feeling of great thirst arises within you and suddenly panic to find a source of water. You stand up and look around. There is nothing but sand dunes for miles. Soon it will hit night time, and you will need to find shelter. Deserts get very cold at night, especially in Balfia.

"Could I be in Balfia?" You question yourself.

If you are in Balfia, then that is good news. Since Balfia is basically a planet of pure deserts, that means there should be many cities, trade stops, and more to find before nightfall. But being in Balfia can also be a bad thing. Balfia is home to the Hollowtooth. One of the biggest bandit groups in the entire Balfinar System. That won't be a problem though if you find some sort of civilization before nightfall.

With this in mind, you start heading in a random direction hoping for something. As you are walking you try to remember why you are here. The clothes you are wearing are all ripped, and ragged, and can't remember a thing about who you are. Maybe later you will remember something.

Your quench for thirst continues, but finally, you discover some sort of manmade structure. A hut, with a campfire, going. It's not much but it appears someone is living there...

You decide to raid the place. You need new clothing, and food and water. Sneakily, you make your way to the camp. It looks like only one person lives here. You will have to take him out.

The sun has almost disappeared from the sky. Its the perfect time to steal some stuff. Laying against the hut is a spear and you grab it. As you grab the spear, you hear someone moving around inside the hut. You decide to wait until he exits the hut, then take him out. After only a minute or two of waiting the man leaves his hut, and you stab the man in the heart with your spear. He drops to the ground, dead with blood spilling out of his chest. Sometimes its either kill or be killed in life.

The camp is all yours now. You raid the hut and find an extra pair of clothes, a pump shotgun, and a pistol with only one clip. The shotgun had no ammo except for what was already inside it. It was already loaded for someone like you if you were unlucky...

You decide to pack the pistol, a water bottle, and more spare clothes in a backpack, then leave the hut. Outside the hut was the campfire. Some delicious smelling meat was sitting over the campfire so you eat all of it. There was also a barrel tilted sideways with a spicket. Assuming that had water inside, you grabbed your water bottle, placed it under the spicket, turned it, and sure enough water came out. You filled it to the brim, then drank half of the water in your bottle, then filled it to the brim again. The refreshing taste of the water was too satisfying. So you drank some more. After filling it up again you placed your water bottle back in your bag. Then you use some water from the barrel to get rid of the fire from the campfire. After that, you take refuge in the hut. It was getting dark. This would be a good place to spend the night...

Yeah, that's why my first game will be more story based. It will be a story about different options and outcomes. One of those stories with different endings. It won't be an advanced game or whatever you guys call it. And it won't have any items.

I have been thinking about the idea for my story for a while now so I hopefully won't quit.

I'll just try to become familiar with the layout of the editor and all.

I guess i'll be fine then. My story is no where near 500k words

ok thanks for the advice, also I looked at your profile and found some great tips to help with my writing. For example grammarly lol. I'll use those tips in my story.