“Writer’s block is a fancy term made up by whiners so they can have an excuse to drink alcohol.”—Steve Martin 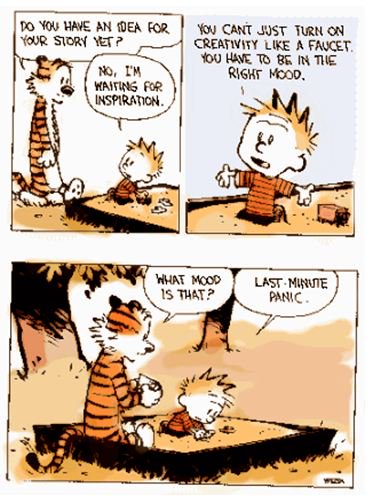 99 Problems but a Girl Ain't One

Samson, the biblical hero of great strength, seemingly had much going for him.  He was strong, had women, and could even kill 1000 men with only the jawbone of a donkey for a weapon.  However, in the biblical account, Samson is betrayed by Delilah, and ends up blind and imprisoned before his heroic death.  Could he have chosen a different path? Or was the path he chose the best one available. You get to choose.

You are trying to corrupt all the pengs

Exactly. In order to perform the proper ritual, the original cause of the curse must be known.  There is no way to produce a perfect inverse without first having the starting value. If you just guess at it you could become double cursed.

Sent is an expert at these things. It would be wise to heed him

It should be possible to get uncursed once cursed. But it would involve finding a way to draw the exact inverse of what brought the curse.  This can not be just simply a drawing reversing the cursed actions, but one that in conjunction with that drawing brings the curse effects to zero.

plus if you are too lazy to read your own story, why should I?

You've read this one right?

Sent could probably write an opus encompassing all the leftover prompts in one story.

Apparently your impression was wrong.  You are locked in by EndMaster himself.

there is an old saying about don't play around on the river bank if you are not prepared to fall in the water...

Really.  Why did you have your volume on? That's just basic.

“Hey, look at that thread sticking out.”

“Perhaps you should pull on it.”

“Well, it might cause the whole thing to unravel.”

“C’mon.  Just pull a little bit and see if something happens.”

“Just do it. You know pulling that one random thread will be so satisfying.”

“Maybe. But again, it could completely unravel everything.”

“So, what if it does.  Look at it.  That thread is the only little thing out of place.  It is your duty to pull it.”

“You think so.  But you can’t stop thinking about pulling on it either.”

“That one thread is messing up everything.  Just look at it randomly sticking out.”

“So, how about you don’t pull on it.  But you just test how much force you would need to pull it.”

“Well, just get hold of it and give it a small, slight, easy tug.”

“Still the same. And I still don’t want to pull on that thread.”

“But it is begging to be pulled. It is just sticking up all by itself!”

“Is there any way I can shut you up?”

“Promise you will shut up?”

“Well, just brush your hand over it.  Perhaps it will force that thread to lay down and it won’t bother you anymore.”

“You didn’t answer my question.”

“Ugh. Alright. There.  See I brushed my hand over it.”

“It’s still sticking up.  You should do that again.”

“You know what would help?”

“Ok.  I’m just going to see how tied in this thread is. I’m not pulling it. Just testing it.”

“Hey, no judgment here.  That’s what I’ve been saying the whole time.  Do your thing.”

“Oops.  I think I pulled too hard.  Now that thread is really sticking out.”

“No. Doesn’t work like that. Perhaps it will come loose and not unravel everything if I'm careful.”

“I’m going to try this gently.  Let’s hope it does not all come apart.”

“You really messed that up.  Everything unraveled.”