TharaApples, The Grandmaster of the Written Word

I like to read and sometimes partake in some witchcraft here and there. Apples are also great, as they're good for consumption and being turned into juice, as well as various pastries.

My name is Thara if you couldn't tell. A witch that was turned apple goddess by her own admission. I have a wealth of knowledge on silly things.

The Tale of the Foolish Princess 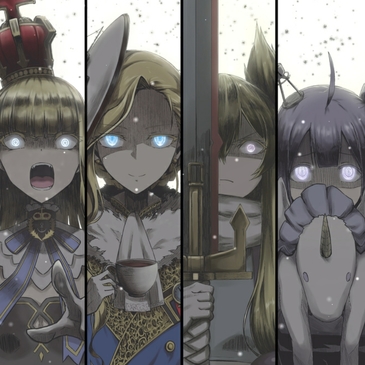 Family must die. With a kingdom in shambles, and a crown too heavy in the weight of both responsibility and sin, someone must acquiesce the throne. But what can one princess do?

Update: Taking ninjapitka's very helpful and wonderful comment in mind, I've went back to this story to iron out many of the typos that were present in the first publishing. So I want to thank him for basically allowing me to bring a hopefully improved story-game here for you all to experience. However, there still might be some that are present. If so, feel free to point them out in a comment or message me directly if you feel the want/need. In any case, I hope any potential enjoyment isn't too badly affected, and that this is something that can be found fun in some capacity. Thank you to ninjapitka again, and whoever reads this.

Update #2: The story-game is in the progress of being proofread and fixed up a bit. A special thank you to Tim36D for sitting down and giving me a list to follow for these corrections.

This story is a contest entry for EndMaster's Dark Fantasy Edge lord contest 2. I wouldn’t call the protagonist in this instance an edgelord, but the story does have some rather dark themes to say the least.

Foolish Princess has three endings that you can receive. There's one that is honesty pretty normal. One that can be considered the 'bad' ending. And there's a 'true' ending that can be reached as well.

I hope you all enjoy it.

A select few? Does this select few travel around via buses that have chaperones on them?

I have deducted two points from you.

Two points deducted for every meme. :)

Unless I edit my post to change it to 20, or maybe even 200 :O. I have modly powers, I can edit my post even after someone replies to it unlike the rest of you. Lel, get good, gg 2 easy, diagnosis? Skill issue.

Two points for every meme.

"I'm guessing your time in prison is the reason why you aren't allowed to loiter near places where children frequent" sounds overly retarded. But I can see why you would go with that.

I'm guessing your time in prison is the reason why you aren't allowed around school zones.

You could have at least changed the thread's title up a bit.

A wizard that is a racist, rapist, and also has genocided in the past, but is too old now to do so. You can also make him someone that diddles kids for an extra layer of coal to the character. Also he still wants to do the genocide, the king knows but damnit this is our greatest wizard. The wizard however has a secret class of sorts that he teaches these ideas to, and now you have a small faction of racist wizards in your story. Usually such characters would wear white hoods, but since this is fantasy they become your wizards that wear spooky black hoods that block off their faces and stuff.

Well, you can never tell until they're popping out miniature versions of themselves.