What the title says.

Hey there, this made me think of you guys (even as I should be speed-writing my thesis) because you were the ones that finally made me watch The Good, The Bad and The Ugly. I knew him well before that obviously, and I don't know how appropriate this thread-hijacking is, but iirc mizal was also quite fond of his music. I might hop back in once I'm graduated btw, we'll see.

He was 91 and his career was over, so I hope he was satisfied with what he had accomplished and with what his works still accomplish.

"Morricone told me that there [in The Mission] he saw enacted something that he'd always believed, that music could be a source of salvation."

"What's important to me is the quality; what I hope people will remember about my music is a certain quality, even when the music had to be simple I always tried to make it recognizable."

Useful Latin dictionary. The English section is a bit more barren than the main Italian one, but it's still better than nothing.

I took a peek in just to see how you guys have been doing while I'm stuck at home because of the virus thing, and seeing this is quite disheartening. Without Cricket, an integral piece of the community is missing. I remember when she belted out a Czech song directly into my eardrums because she had forgot her mic on in the music chat. I still listen to that song sometimes, and I improved the first two lines with the help of Google Translate my superior intellect:

Take care lil grillo, and may you find many hotdishes on your way.

Didn't know they had made an anime about it. 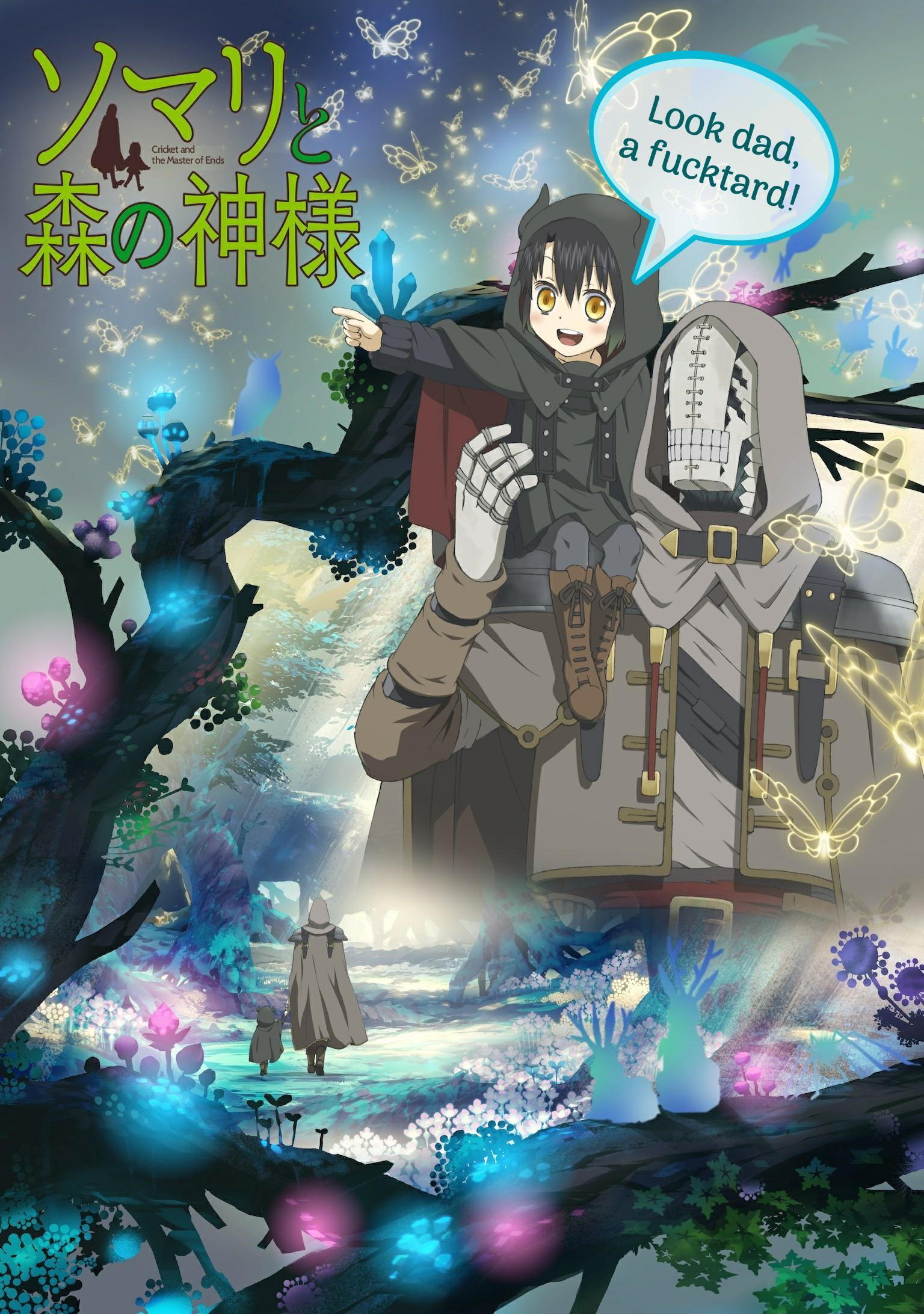 Hm, looks like someone thought it fun to meddle with the necromantic power of emails. Now that I've risen from my pasta-lined tomb (which I'll have you know was perfectly al dente, mizal) I guess I have to provide a minimum semblance of life. Even though I'm pretty sure my mouth is presently leaking embalming fluid, I'll try to power on. I just reinstalled discord on my (finally) new phone, and I'm glad to see I've been a functional prop for the server. I'm also sorry for anyone who sent me DMs asking about my actual well-being, I simply haven't used discord at all and I'm one of those rare fucktards that don't realize saying goodbye before turning into a zombie is common courtesy. Well, unreliable characters are more fun to read than considerate ones after all, right?

I could spew some “life got in the way" spiel, which is also true, but the main reason I stopped posting is because I'm very inconsistent with some of my interests and, well, I lost interest in CYOAs. I’ve always lived by the “don't say something unless you actually have something to say" guideline; when I realized I had forgotten to contribute to the site/discord for a while and I probably wouldn't get back into it, I just dropped off without a word like a dumbass. Which is also why I’m really surprised and confusedly touched I’ve been kept in the server as a creepy ornament, but for OCD purposes go ahead and remove me since at the moment I've got nothing to offer.*

I'll drop back in when I have something to contribute again. I’m happy to see new bannable meat has joined the ranks, and since the only thing I was capable of doing was being anal about grammar, I'm sure I've been fully replaced. I've never liked writing but I've always enjoyed reading what you guys came up with (although sometimes not for flattering reasons) and I think you're a good example of a small but well-run community that refuses to rot away and die as many bigger ones do. The cockroaches of writing sites. Or the tardigrades, for the international nerds still out there.

So goodbye for now, and a generic but deeply felt thanks (especially to Mayana for not crossing the border at night to carve my eyes out, and to Killa for taking a nice pic of my former tomb during his trip.)

And no, I didn't meet Romulus in the afterlife. Italians aren't white enough to be allowed into Valhalla.

*besides my corpse, which I donate as recruit to EndMaster's glorious army of the dead.

I had read Book 1 and 2 and now I'm going through Book 3 because this thread reminded me of its existence.

It's a good CYOA with some good characters and a fun adventure, and I appreciate that it keeps few stats and that they have low values, making them simple to manage. I also like the lore the author built around his story.

It obviously has some limitations due to practical reasons; Austin already mentioned its linearity (I only played one path but it's pretty clear that the story has to converge at some points), and another weak link is in my opinion how OP the protagonist and how tame some of the villains seem to become, making those who seemed difficult antagonists look like not much of a threat all of a sudden. Of course this has to happen in order to make the good guys win and keep most of them alive; I just hope that these kind of character developments are written well though.

One thing I noticed in the third book is that the author's slipped up a few times with verb tenses, using the past tense in situations that required the present tense as usual. I'm still at chapter 2 though, so I won't pass judgement until I've finished this book. I will say that I enjoyed Book 2 the most so far though.

These were great, and Digit being hit by a thicc piece of metal was very appropriate. A lot of characters in this story have incredible powers, making it all the more fun to see what happens when they face off.

I really enjoyed this sudden burst of short stories from you, and I think writing down these kind of small experiments might have also been helpful for you. This one was close to perfection in a grammatical sense (bar the "he laughed" in between Rob's final lines, which should have been capitalized) and the writing style was anything but "dense", which is what you were concerned about in the last story if I recall correctly.

You tried going all-dialogue with this story and it was a successful experiment, and not an easy one in my opinion. Writing a long dialogue sequence and keeping it from becoming a shopping list or a straight-out theatre script is a tricky matter, but you managed to intersperse it with the right amount of descriptive bits and action at the right time. There were two instances where I thought you had gone too long with pure back-and-forth dialogue but I'm almost certain that's just a subjective opinion of mine since I tend to get lost when the dialogue goes on for a while without identifying who's saying what. In general, having a few lines of dialogue without adding dialogue tags or anything else can lighten up the style besides also quickening the pace, and so it can usually be a good idea.

Looks like I got this far without mentioning the main theme of the story or the plot, typical me. I thought the idea of having an imaginary first person narration was brilliant, and I liked that the subject was treated simply and in a light tone, without great showings of existential crisis. The "less is more" rule strikes again. The way you described his state in the flashforward paragraph at the end also didn't disappoint and didn't break my immersion; remaining vague and using figurative language there helped, I think.  From a technical point, I appreciated your choice of trying a flashforward break before briefly coming back to the main time of the story to tie up the action with the final lines.

In conclusion, I'm glad you decided to try out different styles and ideas with these short stories and I mostly liked what you wrote. CYOAs are a different beast from short stories, but you can definitely be a good writer.

I liked it a lot, probably because I know who Beccaria is and I wouldn't have expected to read something about him on here. You also polished your writing in terms of grammar from the last time I commented under one of your stories; the only error I could find was the repetition of "seep" in the third sentence.

As for your style, you always seem to enjoy writing detailed descriptions, which is not a bad thing per se; just be sure to dose them right so they don't overpower the narrative and clog the pace, especially if you have to tell your story in little space. Just to be clear, you didn't make such mistakes with this one. As you said, you had to tell a large story with few words, so you had to devote some paragraphs to description in order to recreate the atmosphere of the time, and I think you managed to do it quite well.

As for your second post, I didn't find the story vague at all. If anything, I think it was very specific to a particular period, place, event and person. What might be lost to a reader who has never heard about Beccaria is the purpose of telling this short story, its significance.